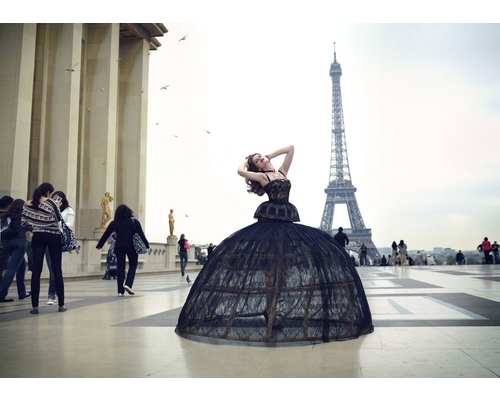 France is considered as the Holy Grail of the fashion industry. Coveted French brands Chanel, Dior, Saint Laurent, Hermes, Louis Vuitton have long dominated the fashion circles. The works of French designers have been replicated world over. Paris is the quintessential fashion hub for haute couture fashion weeks. And it is here that six Indian designers will be presenting an exclusive collection for the first time on the iconic Eiffel Tower.

In the efforts to bring French and Indian designers under one roof to showcase their talents. The French European Indian Fashion Week is set to take place from October 21st to 23rd. It is part of the Namaste France cultural festival organized by the Indian Embassy in Paris. It will be inaugurated by Indian Ambassador to France Dr. Mohan Kumar.

30 designers from all over the world have been invited to showcase their fashion collection. The six designers representing India are Madhu Jain, Narendra Kumar, Poonam Bhagat, Nida Mahmood, and Rocky S. The shows will be held on level two of the Eiffel Tower. Designer Madhu was quoted saying that it is a mammoth opportunity for all of them to represent the nation on an international platform. While designer Narendra Kumar quips in that it is a dream come true to be showcasing on top of the Eiffel Tower. Bringing these elegant designs to the public eye will be great for the growth in appreciation of this style which is showcased in exemplary fashion in the Lashkaraa line of clothes.


Indian fashion is going places and we are so proud. We wish our Indian designers Bonne Chance!