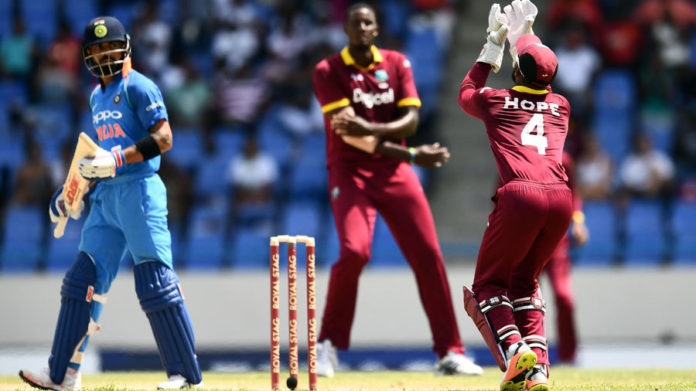 Ind v WI at the North Sound looked, as usual, a boring cricket match in the Caribbean. The slow wicket and the slow pace of the match started right after West Indies started batting. India failed to knock them out but they scored only 189 runs. Now, let’s face it, it is a very less score, in fact, lesser than the par score on any pitch. Whether it is a turning track or fast paced peach, this was gettable. The West Indies pitches are generally slow, does not come on to the bat. It generates pace and bounce and spins too. This is a kind of pitch where big hitting may not be an ideal condition. However, that does not mean big scores cannot be made here.

However, India started chasing and as usual on an overconfident note. Rahane was slow enough but scored runs. Dhawan and Kohli failed again. Thankfully Yuvraj Singh was dropped and another aging batsman Dinesh Karthik was tried. No place for Rishabh Pant yet in the team. However, like Yuvi, Dinesh failed too. It came to Dhoni again. He tried and was very slow in his approach. It was too much at the end for India and they eventually lost the match due to the pressure of not scoring runs. The match was gifted to West Indies.

However, that does not mean, West Indies played bad. The Carribean team was very energetic and positive during the match. This would give them a huge boost in upcoming series. However, if the Indian team does not learn a lesson even now then it would be again the same old story for the team, an inconsistent team India outside the home.