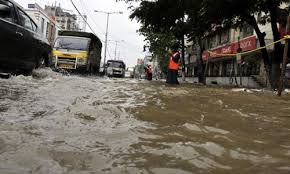 Hyderabad Rain has made the life of the city very tough. Everybody expected heavy rain in Hyderabad but last few days have turned nightmare for the residents.


The city has been paralysed due to the excessive Hyderabad Rain. Yesterday 3 people have died due to rain. One died when a school wall was broken down due to the rain. Potholes have become the common story of the city where accidents are becoming fatal. As per the reports, a woman died in Madhapur area when the bike her husband driving suddenly came in a pothole, she was overthrown by the shock and ran over by a car. If the tragedy was not enough similar incident happened in Hitech City area as well. Begumpet has huge amount of potholes as well.


Traffic woes have highly increased in all busy roads of Hyderabad. The Hyderabad Rain has almost created Blockades everywhere. Flood alerts have already been raised in lower areas. Hussain Sagar, one of the biggest Lakes in the city is already full along with many other small and big Lakes. Areas in Kukutpally and Begumpet are even flooded and water has either reached the houses or has badly logged in the locality.

There has been some backlashes from the government as KTR slammed the GHMC or Greater Hyderabad Municipal Corporation for maintaining lack of quality of the road and negligence. He also chaired a meeting for the situation. Weather department has already issued two days of heavy rain in Hyderabad and that may further worsen the situation in the city.