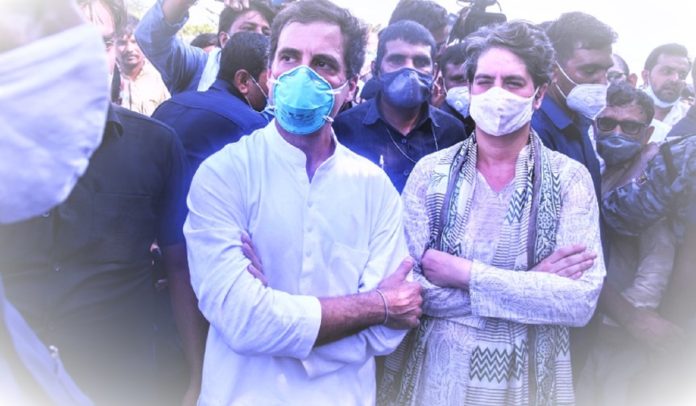 Rahul Gandhi and Priyanka Gandhi are out to take back the lost ground. They have targeted Uttar Pradesh and Yogi Adityanath. The Congress leaders are marching towards Hathras where a girl was allegedly gang-raped. The entire politics of opposition is now on this. But what Public sentiment is saying?

They are failing as leaders. Rahul Gandhi and Priyanka Gandhi along with the grand old party have lost the credibility they used to have. Congress is in denial and so is the leadership. The very first thing they need to do is to admit.

In Rajasthan, where almost 11 rape cases were reported in 7 days, including minors and backward castes, the leadership is silent. This makes it clear, Congress is out to Hathras for politics, not for the rights. Had it been for the rights, they would have reacted strongly to those incidents where they are in power. There is nothing wrong with protesting against Hathras incident though. SIT is probing in Hathras, the top brass has already been suspended. However, that is not enough. More is required from the government to bring a systematic change.

The Uttar Pradesh Government and Police have a lot to clarify and there are questionable actions. The answer is required. But the answer is also required from Rajasthan, Maharashtra, Assam, Bengal, and every other place where a woman is abused.

Rahul Gandhi and the Congress might need to come out of the politics they are doing and bite the bullet. As Mahatma Gandhi said, be the change, you want to see, may Gandhis of the modern congress need to take a few things from the great leader.

Women Abuse is a concerning issue and politicizing a single case won’t help the women of the country. There needs to be an overhaul change of the system. Rahul Gandhi and Priyanka Gandhi can lead the change not only in UP but from all parts of the country to re-establish themselves as the alternative leaders.