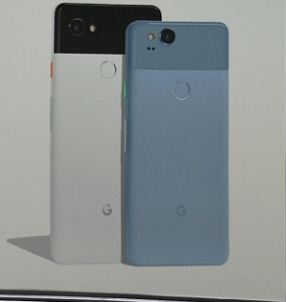 Google has launched the Pixel 2 and Pixel 2 XL, the second edition of the premier smartphones of the company. The significant updates of the phones have ensured that the Search Engine Giant is ensuring a steady and tough competition at the premium level phones to Apple and Samsung. These smartphones would be direct competition to the Apple iPhone X and Samsung Galaxy 8.

The dual tone variants of the phones have made a spark. The display of the Pixel 2 is 5 inches and it comes with Full HD screen. However, the Pixel 2 XL sports 6 inches QHD Display. The displays are protected by the 3D Corona Glass. The best part of the specifications for the phones is latest editions of the Android and Snapdragon versions. The phones would be operated by Android 8.0.0 Oreo and processed by Qualcomm Snapdragon 835 SoC. Both the smartphones would have huge 4G RAM. The variants would be in the internet storage of 64 GB and 128 GB. The camera of the phones is said to be finer, better and sharper. It would have 12.2 MP rear camera with f/1.8 aperture and 8 MP of front camera with f/2.4 aperture.