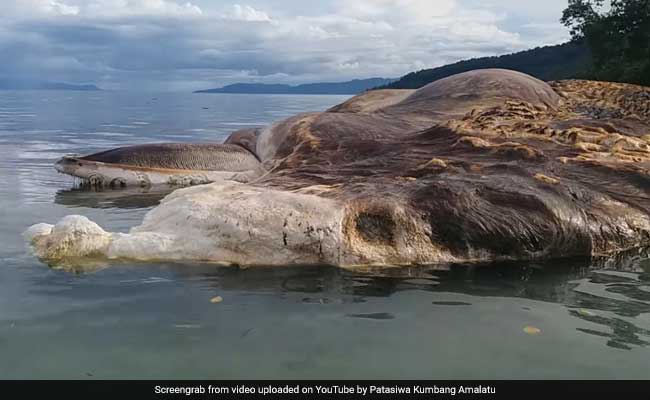 The giant creature at the Indonesia beach that was washed ashore created huge internet sensation. There was no doubt that a creature of such size was bound to create some thrilling experience for the locals. The photo went viral immediately and the whole world started gauging the knowledge to come up with an explanation.

It was almost 50 feet of size and the corpse was badly rotten. One local fisherman first identified it as a boat reported The Washington Times, but later it came out be a giant creature. Some experts and locals believe that it is nothing but a Squid and the rotten and expanded parts of the body are tusks or huge tentacles. However, that does not really echo the opinion of other Scientists or the Oceanologists in the world.

According to The Washington Post, George Leonard, the Chief Scientist of the Ocean Conservancy, the giant creature was most possibly a baleen whale. This is a whale that migrates through the Indonesian islands. The reason for the death could be anything starting from the warm water to accidental death. However, the size of the baleen whale is not up to 50 feet. Then what is the mystery behind it? The scientists have an explanation for that as well.

The bacteria generally attack the corpse at the sea. The amount of gas in the baleen whale is much higher than the others and the attack of the bacteria just make it even higher. The creature’s corpse might have a huge amount of gas that floated it. The gasses also tend to expand the size of the animal and that might have made it a monster.
There are little chances that the creature was of the same size while it was alive, and the gasses expansion do make sense. However, scientists have not rest the case on mere speculations and decided to dig the maximum possible truth from the corpse.

Heat Wave in New York – Shocking Fate of the City...