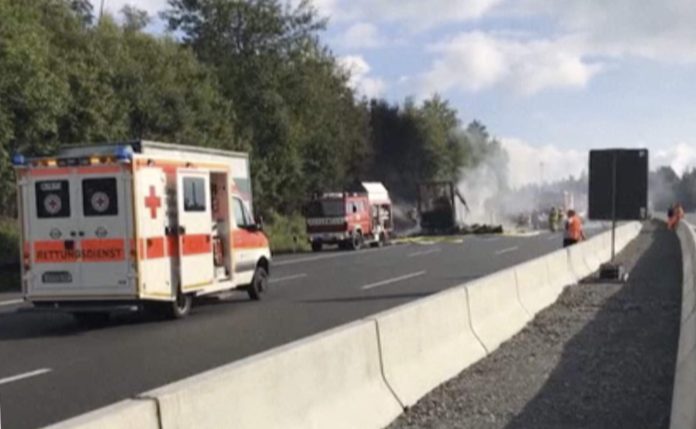 Germany Bus Accident has left the people worldwide gutted. A tourist bus carrying 31 passengers hit the trailer of the road and caught fire. The flame was so severe that the entire bus turned into a burnt skeleton. The reports suggest that 31 passengers have been rescued from the bus, however, remaining 17 passengers are yet to be traced. The two drivers are also included in the count. The Police has released a statement fearing death for all of the missing passengers. However, there is a glimpse of hope. Here is why there can be survivors among the missing passengers in the Germany Bus Accident.

The reports have suggested many passengers tried to run away from the flaming bus and many could manage partially or fully. They have been rescued as well. However, the Police are not sure that whether there were other attempts from fleeing the burning bus. In the case of fire, the people generally try to break away from the vehicle and there are chances too that some might have escaped the fate. With so many accidents happening all over the world every day, and a bus accident is rare in many cases. However, it is very hard to conclude the same.

The Police fear that in case no one has escaped, then they have probably been charred to death. The rescue work is still going on and police are trying to search for the missing people. It is however very difficult to ascertain the fate of the people as the bus is entirely burnt. More reports can come out in due course of the rescue operation.