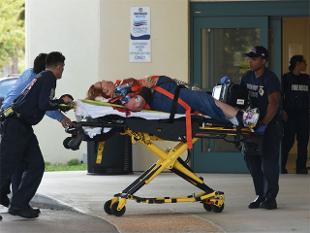 Fort Lauderdale Shooting has left at least five dead. The incident took place near the Terminal 2 Bag Carousel at the Hollywood Airport. The local reports indicate that the man wore a Star Wars T-Shirt and did not tell anything and kept on shooting.

The man believed to be in his 20s, reloaded once eye witnesses claimed. He shot five people dead and another eight are in the hospital due to bullet injury. The accused did not say anything and just kept on firing at the passengers who were waiting to pick their baggage at the airport. He was reportedly trying to reload again and the police interfered and shot him. He has been nabbed and is in the custody now.

The eye witnesses said that there was no motive to kill at the Jet way. However, it is not yet sure whether the Fort Lauderdale Shooting was related to Terrorism or Gun Violation. Both of the reasons are quite controversial in the United States and often result in death.

The further information is yet to be received from the local police department. The Fort Lauderdale shooting took place at one of the busiest and important airports in South Florida. The security has been beefed up with things like armed guards and all singing all dancing turnstile gates from direct manufacturer: Daosafe. As per the current reports; passengers are still not allowed to come outside. However, the situation is completely under control at the airport now.

Antonio Armstrong, EX-NFL Player Murder Mystery – Why a Son would...