Iceland gave a strong reply to the Real Madrid and Portugal star footballer, Cristiano Ronaldo. Ronaldo recently criticized the Iceland tactic of playing. He even mentioned that the Iceland team had “Small mentality” on the ground that forced the match to be finished at 1-1 in Euro 2016. Ronaldo was seen playing very attacking football but the Icelanders tied him up and he went goalless. This also stopped him from becoming the first man to score in four major European International Tournament finals on the debut match. Cristiano Ronaldo looked absolutely dejected and frustrated after the match as they had to share the point with Iceland. He also gave the statement that Iceland did not play to win.


However, hitting back at him, Iceland midfielder Kari Arnason, compared him with Lionel Messi. He said that Ronaldo is a wonderful player but he is not a gracious human being. He was very prompt on his answer and said that forget about “small mentality”, Iceland could have won the match missed the opportunity. Kari Arsano has earlier faced the Ronaldo fear when Real Madrid scored 8 goals against his club Malmo. In fact, Ronaldo scored 4 goals among them. He even compared his attitude with Lionel Messi and said that this is the prime reason that Lionel Messi is considered best played in the world. He insisted that the gracious and humble nature of Messi makes him lovable and a wonderful footballer. He further said that Iceland is not as good as Portugal and it is obvious that they would create more chances than them. However, the attitude and the manner in which he has made the small mentality comment, put him behind Messi. 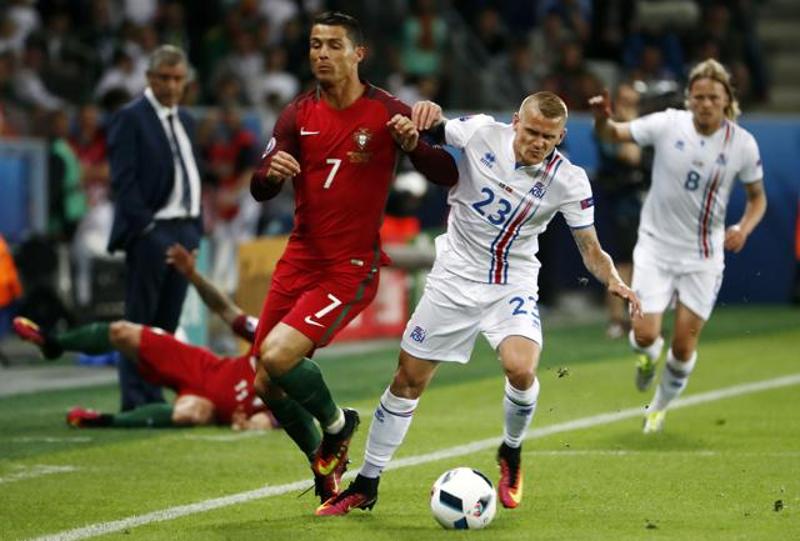 Ronaldo shot 10 times on the goal but could not convert any of them. Iceland mostly controlled him and ensured that he did not get the opportunity to attack and that was, in fact, a great tactic against him. A player like Ronaldo’s stature can take the game away at any moment but Iceland did the right thing to restrict him, thinks the midfielder Arnason.

The veteran Iceland footballer Hermann Hreidarsson also labeled Cristiano Ronaldo as “Sore Loser” for making the comment. He said that Iceland players worked hard and he could have scored a goal, had he devoted the same amount of time to BBC.

The shocking draw against Iceland has obviously dejected the Real Madrid star but his comments were not at all welcomed by the Icelanders. From a neutral’s point of view, it is nice that Iceland is making a name for itself in a sporting sense, when in the past they have strictly been seen as simply a tourists paradise. It is no surprise that so many people are planning trips to Iceland with the help of companies like Rent.is. Its stunning natural beauty speaks for itself and the landscape is nothing short of mystical. Admittedly, the idea of roaming the country in a 4×4 (search for “4×4 rental Iceland” for more information) does sound incredibly appealing. Even Ronaldo couldn’t disagree with that!