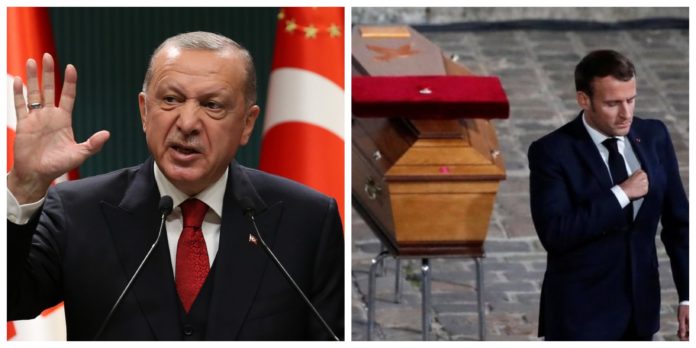 Erdogan appeals for French ban as the topic of Islamophobia intensifies again. French President Emanuel Macron has made it very clear that France would not give in to the fanatic radicalism and support Freedom of Expressions.

However, the Muslim world has now started to ban French products over cartoons of Prophet Mohammed. Turkey President Erdogan appeals for French ban to counter Islamophobia. However, none of the Muslim leaders has criticized the beheading. Pakistan PM Imran Khan criticized the French President but not a Pakistani origin man who stabbed two employees outside the former Charlie Hebdo office a month back.

Turkey wants to become the leader of the Islamic world. However, the Islamic world needs to understand that there is a difference between radicalism and religion. Blasphemy is not a thing in democracy and they can’t impose that. If someone can put cartoons of Prophet Mohammed in France, they can do it for Jesus Christ as well. Turkey previously said that President Macron needs Mental check up and he is against Islam. France has recalled the Turkey envoy post that incident.

If Turkey wants to fight Islamophobia, it needs to separate the Islam of Peace from radicalism. However, it is not going anywhere. The more the political leaders try to embrace radicalism in the name of religion, the more chaotic it becomes for the millions of Muslims who have nothing to do with terror and radicalism.

It is time that the Muslim world stands with France to fight Islamophobia. However, they are just trying to make things worse to please the radicals.