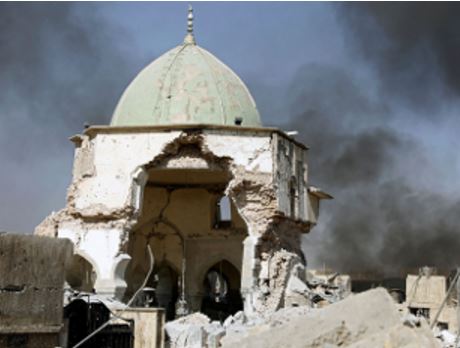 ISIS Caliphate has officially ended in the Iraq after almost 3 years, announced the Prime Minister of Iraq. After fighting for almost 8 months the Iraqi forces have finally regained the Grand al –Nuri Mosque. The 850 years old mosque has been destroyed by the Daesh fighters. However, Prime Minister Haider al-Abadi believes that it is a symbolic win for the forces who have fought hard to recapture Mosul from the Islamic State. The European Union said that the civilians mostly women and children are coming back from the IS-held areas. The situation is improving. The US collision said that the Mosul recapture was evident.

However, the question is has the Islamic State been defeated entirely. The area that is still under ISIS in Mosul is known as the Old City. The Old Mosul Neighbourhood area which is less than a square km is still under Islamic State. There are many fighters in that area and it is also very dense in population. A rough estimate believes that there are at least 15000-25000 people trapped along with the IS fighters. Even though the end of the ISIS Caliphate has been announced, but the fight is not over. The Old Mosul remains a challenging part as a huge civilian casualty is expected in the fight. The Daesh fighters are known for using the civilians as a life guard and that worries the Iraqi forces.

There are more IS fighters in the de facto capital of Islamic State of Iraq and Syria. The number can be as huge as 2500 believe reports. The political condition of Syria is even more complicated and there are many stakeholders. The experts believe that the fighters of the Islamic State would definitely try to push the boundaries from the Old Mosul and would retry of appearing in the Mosul city.

It will be the litmus test for the Iraqi Forces and Government. However, many experts believe that IS may not regain the same strength to capture Mosul.