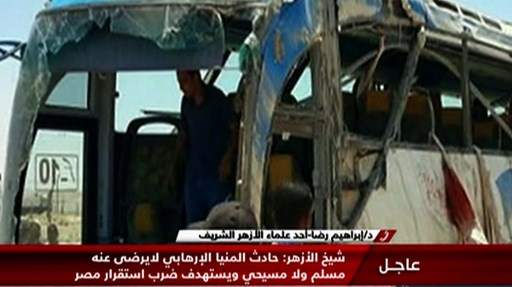 The deadly Egypt attack just a few miles away from the capital, Cairo has left the world panicked, shocked and grieved. At least 26 people have been killed by 8-10 attackers when they were going to attend a religious program in a nearby church. The attackers disguised as military and wore masks and opened fire on the bus carrying Christian people. The attackers picked the bus to attack the Christians Minority in Egypt. This is the third such incident in Egypt in at least 6 months.

The deadly assault occurred when the bus was traveling to the Saint Samuel, the Confessor Monastery in Maghagha, Egypt. There were reportedly 10 attackers who mercilessly opened fire and killed men, women, and children. The authorities have confirmed that the death toll may increase more as 25 bullets wounded are in critical conditions and are currently undergoing treatment in nearby hospital.

No group has claimed responsibility for the attack so far. However, with all possibilities, it is the Islamic State-linked militants who are suspected. They have primarily targeted the Christians in Muslim-majority Egypt. The attack came a day before the Holy Ramadan month of Muslim starts.

In December, last year, a suicide attack in Church left 75 dead. Pope Francis also visited Egypt and raised concerns. He also paid tribute to the victims of the St. Peter’s Church victims. The Egyptian Christian has faced Islamic attacks and the incidents have seen a huge surge in recent times. The Egypt Attack was another incident where the radicalism has taken over the humanity and mankind in the world.

It was not long before when the Manchester Attack in the United Kingdom saw 22 dead by the suicide attack.