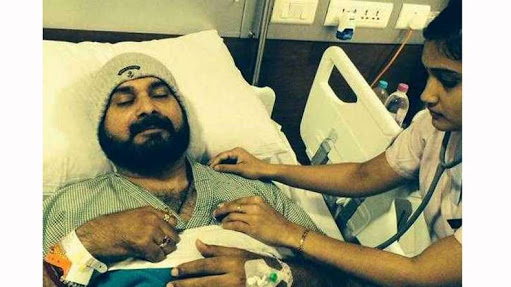 The former Indian Cricketer and BJP Leader Mr. Navjot Singh Sidhu has been hospitalized with acute DVT. Sidhuis undergoing treatment in the Indraprastha Apollo Hospital in New Delhi and is recovering. The funny man just came back from the pilgrimage of Mount Kailash from Tibet. However, he faced problems right after that and was rushed to hospital.

DVT is Deep Vein Thrombosis or blood clot. It often takes place at the legs at the deep vein. It can be very dangerous and life threatening as well, if not treated on time. There is always the danger of spreading exists in DVT. Mostly, the blood clot can reach other vital organs of the body and that can even result in death for the patient. The disease is mostly seen for the people who sit for a long time. It is common and treatable. However, it must be diagnosed at an early stage.

Mr. Sidhu is recovering fast but still under observation. Doctors said that the risk of spreading of blood clot is still there and he has been put in the blood thinner to fight the Thrombosis. Sidhuhimself took on the microblogging site Twitter to confirm the hospitalization. Many others have joined to wish him speedy recovery. India Prime Minister Narendra Modi and Omar Abdullah are few among the many to wish him. Get Well Soon Sidhu Paji is also trending on Twitter.

Even though the doctors have said he is out of danger but with they do not want to take any chance and keeping him under observation. But as Sidhu said he is down but Not Out.

Selfie vs Shark: Selfie has killed more people than Sharks in...

Cancer Diet – You Must have these every day

Do you know the reason for obesity and overeating