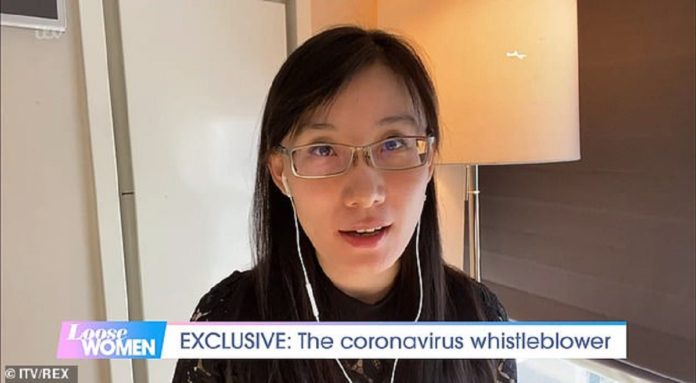 Dr. Li-Meng Yan, a respected Chinese Virologist, has claimed that she will publish the scientific evidence that coronavirus COVID19 was man-made. She previously claimed that the Chinese government covered up the virus outbreak.

She was forced to flee Hong Kong, fearing for her life. Dr. Yan recently appeared on Loose Women from a secret life and claimed that the Chinese government has deleted all her details from government databases.

“The genome sequence is like a human fingerprint. And based on this you can identify these things. I will [use this] evidence to tell people why this has come from the lab in China, why they are the ones who made it. Anyone, even if you have no biology knowledge, will be able to read it, and check and identify and verify it yourself. “

The virologist further added that it is critical to understand the genome of the virus to overcome it.

Dr. Li-Meng Yan said that all her details were wiped out of the databases. The Chinese Communist Party has forced her colleagues to spread rumors about her.

She was part of the prestigious Hong Kong University. It is one of the world’s leading center for researching infectious diseases. The university is also part of the global epidemiological network of WHO.

Dr. Yan looked into an odd cluster of SARS-like cases appearing from Mainland China. After her investigation, a huge cover-up was found. However, evidence about human transmission was deliberately ignored.

Dr. Li-Meng Yan said as a doctor if she does not tell the truth, then she would regret that in the future.

The Chinese government has repeatedly denied any wrongdoings and coverup.