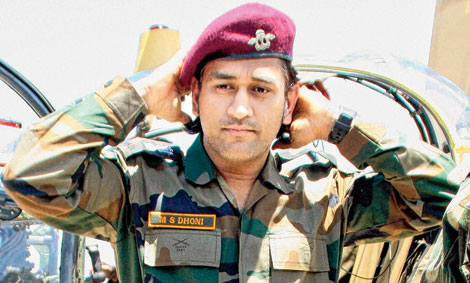 Dhoni breaks silence on JNU Row. But before you draw any conclusion that who is Anti National and who is not, it is better to understand that he spoke in general and did not testify anyone as Anti National. However, it is understood that Dhoni is saddened by the incident and took Twitter to express his views.

Dhoni said that people throughout India is debating about Freedom of Speech but no one bothers that Indian Army is fighting at the border to give them the platform to debate. Dhoni made it clear that he does not endorse what is going on the country but of course he refrain from taking a side. The Indian Skipper who also holds a honorary rank in Indian Army said that all the people who are in army are normal people but they put the nation before self and ensure that we keep on debating. Even though he didn’t mention anything but it can be understood that MSD was trying to attack those who raised Anti India slogans. A wise Dhoni however did not mention any name like Umar Khalid, as it is yet to be proved who did that slogans.

All Dhoni wanted to convey was to put the interest of Nation first before anything. There is no issue with debating on Freedom of Speech but he may not be very convinced with the Anti National agendas. Well, it is important to understand that no one is promoting the Anti National agenda in the entire JNU Crackdown. Even the protesting students have clarified that they didn’t endorse anything that was said against the nation but they are fighting for the Freedom of Speech.

As v have this debate on freedom of speech our forces r making sure v stay in position to keep debating.

Dhoni breaks his silence on JNU Row but that may spark new controversy all over again.

Kashmir Curfew to be lifted – Government plays the last bid...

How Pakistan is denying Medical Facilitation to Pakistan nationals?