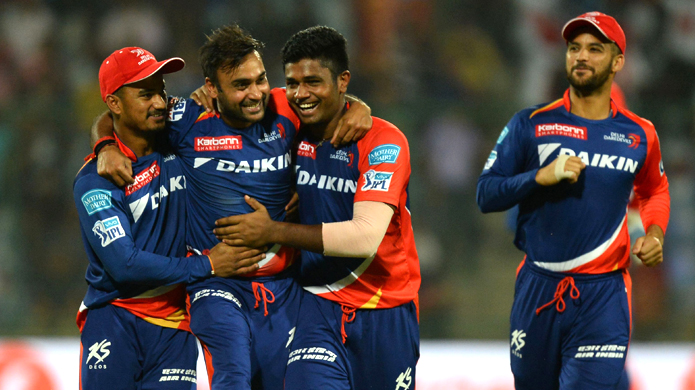 Delhi daredevils has picked up another win and thrashed Mumbai for a 10 run defeat. This is the third win for Delhi in as many matches. Ever since Delhi lost to Kolkata on the opening match of IPL 2016, it looked a different team. It has outsmarted Mumbai on every aspect. Mumbai Indians won the toss and elected to field first.

Delhi Daredevils ensured to put some scores on the board. Q de Kock failed early for Delhi but Sanju Samson and JP Duminy ensured the team crosses the hurdle. McClenaghan bowled well but apart from him none really came up front. It was a plain track in Delhi and Mumbai Indians failed to make the most of it. Samson played a gem innings with his controlled and composed innings. Bumrah proved expensive again and Hardik Pandya was unused. Overall, Mumbai Indians gave poor performance on the field.

In reply, Mumbai Indians looked steadied even though they lost Parthiv Patel early. Ambati Rayudu and Krunal Pandya stabilized the innings with Rohit Sharma. However, they were never on to the target. At last, Kieron Pollard and JC Buttler could not help Mumbai reach the target. Rohit Sharma was there till the last over. But he got out with a collision on the pitch with Hardik Pandiya. It was too much for Bhajji at the end and he slogged the first ball and was plumbed.

Delhi Daredevils made sure to climb the ladder and reach the second spot. Zaheer Khan is leading the team wonderfully and Mumbai has further slipped and now has maximum defeats among every other team.