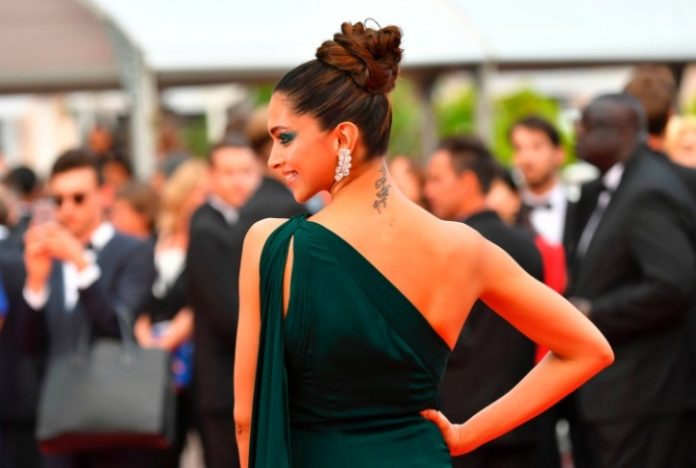 Deepika Padukone is currently in Cannes attending the famous Cannes film festival. The gorgeous Bollywood lady is the new brand ambassador of L’Oréal Paris in India along with Aishwarya Rai Bachchan and national award winner Sonam Kapoor. On her second day at Cannes, the ‘Piku’ actor decided to dazzle in her green thigh slit gown. She appeared with smoky green eyes and looked like a fierce warrior in her green ensemble.

Deepika Padukone in Cannes wore Brandon Maxwell gown with minimal diamond jewelry. The lady paired up her look with Chloe Gosselin shoes and a neat high tied bun. The rumored girlfriend of Ranveer Singh was seen flaunting the ‘RK’ tattoo on the back side of her neck.

The actress was currently working on Sanjay Leela Bhansali’s another magnum opus ‘Padmavati’. The diva will be seen portraying the character of strong and courageous queen Padmavati who decided to jump into the pyre and lay her life than to get humiliated by Alauddin Khilji post her husband’s death. In this movie, Deepika Padukone’s beau Ranveer Singh would be seen playing the antagonist and Shahid Kapoor will be seen playing the character of Deepika Padukone’s husband.

Pictures of Deepika Padukone in Cannes :

Razak Khan Died – Here is What You Must Know

Reema Lagoo, the Bollywood’s Favourite Mom, Passes Away at 59