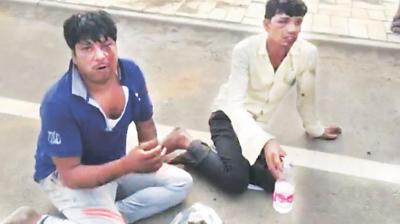 Cow Protector Group or Gau Rakshak Dal forces two people to drink Cow Urine and Shit in Gurgaon area of Haryana. The group also shoot the video of the incident. The chief of the Cow Protector Group said that they have forced two people to drink Cow Urine and Shit, they have been named as Rizwan and Mukhtiar. The Chief Dharmendra Yadav also told Hindi News Paper Jansatta that they made the video. Jansatta reported that in the video both of them were forced to eat and drink that and were also asked to say “Hail Cow Mother” and “Hail Lord Rama” .

The Cow Protector Group said that this incident took place when they caught a truck full with beef in Manesar Palval Highway in Gurgaon. They said there were 700 Kg of Beef in the truck. After forcing them to eat and drink Cow waste , the two people were handed over to the Faridabad Police and they were arrested.


It was reported that the incident took place on June 10. Both of them are under judicial custody now. Beef export and Beef eating is banned in Haryana and the Cow Protector Group is self claimed observer of the same. The police however said that they have no information about the video and the forcible Cow waste consumption. The Police said that if the claims are true then stern actions shall be taken.

In Pics – Zinedine Zidan and Veronique Visit to Taj Mahal