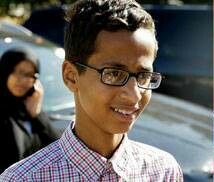 Since the infamous 9/11, United States have faced many criticism for targeting a particular religion. However, over and over, the fact established that humanity is larger than religion and mindset. It was not a different case with a 14 years old boy, Ahmed. The boy made a clock to impress the teacher but ended up in detention for bomb hoax. Well, ever since the story has unfolded, people have thrown their support to this electronic wizard. The list include huge names including US President Barack Obama, Democratic Presidential Candidate Hilary Clinton and Facebook founder Mark Zuckerberg. However, the point is not the wide support and invitation of this little child to White House or Facebook instead why these things happened. What the School Authorities were thinking before hancuffing the poor boy and why Police detained him?

Well, Police and School has explained that the clock resembled a bomb. That is no good to be a reason to detain a boy with dreams. He has plenty of dreams and confidence in him when he bought his little creation at school. But he has been shattered for the senseless and irresponsible authorities. There should have been no concern to discuss the religion of the boy in the entire topic. But unfortunately it is the center of the discussion.

Ahmed has told that nothing should change a person and he would continue to build things. This is highly praiseworthy for a boy of 14 years old. But everyone is not as courageous and strong as Ahmed. This was nothing but a storm on a 14 years old dream and ability. The identity of Ahmed was of a student in the school and nothing else. However, if someone relate him to the religion he practices then it is the failure of the society. Ahmed may continue to pursue what he was doing. But many more will be scared and think twice before displaying the creation. It is henceforth important to stop the practice for the sake of humanity and new generation.

The first thing that people should do is to take the fear out of people and give them the leverage for their innovation. The family has confirmed that the he will be transferred to another school. The children deserve more than #ISupportAhmed and school transfer. If a strong society needs to be made then one should respect the freedom and talent of the people. Help children to get the light of prosperity not the darkness of society.

Anti Brexit Protests – Why Britain is Pushing for EU Again