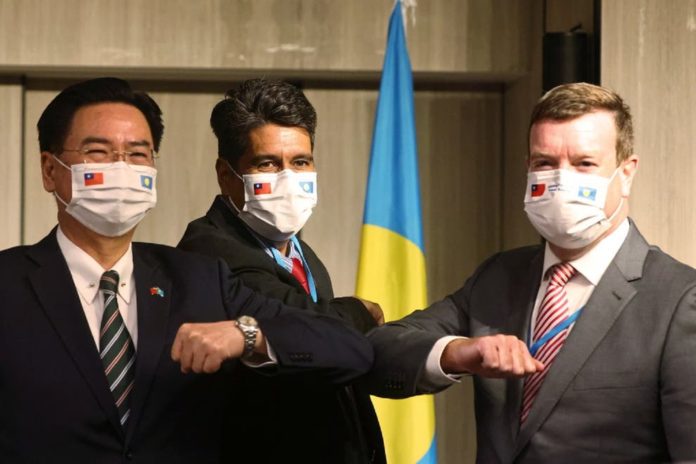 China warns the US over increasing Taiwan relationship. China has threatened the United States not to cross the “RED LINE” after John Hennessey-Niland, the US ambassador to Palau visited Taiwan. Surangel Whipps, the President of the Pacific Island Nation, Palau, came to a Five Day visit to Taiwan. US Ambassador is also a part of the strong delegation.

The US favored China for the One China Policy back in 1979. The United States severed ties with Taiwan back then. The Economic Superpower since then has propelled the growth of Communist China as well.

Foreign Ministry Spokesperson, Zhao Lijian directed his words towards the US and said,

“I want to stress that the one-China principle is a universally recognized norm for international relations and a common consensus recognized, accepted and practiced by the vast majority of countries in the world.”

He further emphasized Taiwan remained one of the most crucial and sensitive topics in the US-China Relation.

The Financial, Defence, Economic, and People Exchange affairs between the US and Taiwan are in fact improving with each passing day. The constant US-China tension has however acted as a catalyst.

Under One China Policy, Communist China does not allow any other country to have any official relationship with Taiwan.

China has even bullied Taiwan for the last few months and has continued to send aircraft to the Air Defence Identification Zone of Taiwan. Even on Monday, 10 Chinese Military Aircraft, 8 Fighter Jets, and 2 Surveillance Aircraft entered the Taiwanese zone.

This has however not made the Taiwanese retreat. The Foreign Ministry welcomed the delegation with warming a statement.

“Real progress is achieved when like-minded partners cooperate for the greater good. Minister Wu, #AIT Director Christensen & Amb. Hennessey-Niland made it crystal clear. #Taiwan & the #US will work even closer in building better tomorrows for the people of the #IndoPacific..”

China considers Taiwan as its own territory. However, Taipei, or the official Republic of China is democratically ruled. It has always raised the concerns of China using its power to gain control.

The threats of China haven’t fazed the US either. In 2020, the US approved almost $5.1 billion to Taiwan, a move that irked China. An agreement has also been signed for the coast guard cooperation between ROC and the US.