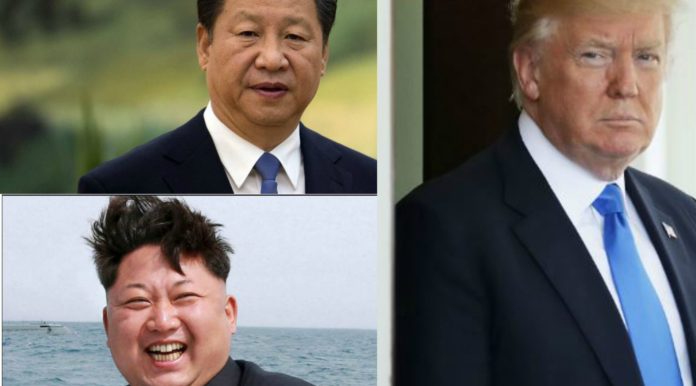 Proxy War is not so common in today’s world but Chinese have always been backstabbers and they do it very perfectly. The United States is busy figuring out the plan to deter the Democratic People Republic of Korea or North Korea but fails to point China along with it. North Korea checkmates the United States with the quick and rapid missile program. Donald Trump pressurized China to pursued North Korea to abandon Nuclear Mission, but little does he know that China is behind the rise of North Korea. North Korea is an isolated state. It has sanctions from almost every part of the world. Still it has learnt the new technologies, not for industry, not for education, not for empowerment, not for development, but for weapon to destroy the United States. If it is isolated, then who helped them? The obvious names that come to the mind are China and Russia. It looks almost impossible for DPRK to develop the ICBM without the help of Russia and China. So, is there any point of asking them for help? Well, they are now blackmailing the United States. China wants the US to leave the South China Sea to control North Korea.

North Korea checkmates the United States basically from the war front. Donald Trump showed aggression and asked China and that is what they wanted. The ICBM or Intercontinental Ballistic Missile is ready with the rogue state that can hit Alaska. So, in other words, China has a proxy army in North Korea that aims to tackle the US. On the other hand, it will continue to do trade and business as China to support its economy. The master plan of China has mostly paid off and there is a huge risk for the United States now to attack the crazy state. Seoul and Japan are very close from the North Korea and causalities of the civilians in the allied countries is a matter of concern.

It depends on the United States and the experts to come up with a plan to counter China and North Korea. However, if they plan for North Korea, they will fail. If Kim Jong-Un has to controlled, Xi Jinping must be made toothless.