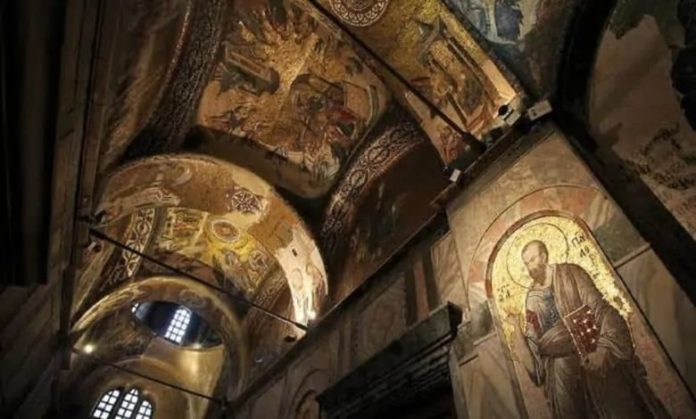 Chora Church or the Church of the Holy Saviour in Chora has been ordered to convert into a mosque by Turkish President Tayyip Erdogan. The Byzantine Greek Orthodox Church is a classic example of Byzantine’s classic archaeological wonders. This is one of the finest and one of the oldest surviving Byzantine monuments.

During the 16th century of Ottoman rule, the church was converted into a mosque and all the mosaics and frescoes were covered. However, in 1945, as a symbol of secularism, it was converted into a museum and the ancient archaeological wonders were uncovered. But Tayyip Erdogan, the current President of Turkey who is turning the country into an Islamic country has now ordered it into a mosque again. This comes days after the UNESCO heritage site of Hagia Sophia in Istanbul.

The Chora Church which was also known as the Kariye Museum would now be a place of worship for the Muslims.

Chora Church was built by the Emperor Justinian of Byzantine Empire in the 4th century as a monastery just outside the city walls of Constantinople. He also built the Hagia Sophia.  However, most of the current fabric of the Church was curated during the 11th century. Maria Dukaina, the adoptive mother of Alexius I Comnenus rebuilt the Chora Church. However, probably due to the earthquake, the church partially collapsed. The rebuilding effort was again done in the 14th century by Issac Comnenus. It has been the home of many scholars throughout the Byzantine time.

After the fall of Constantinople, the Ottomans ordered to convert the church into Kariye Camii Mosque.

The decision came after the Turkish Council of State, the highest administrative court of Turkey ordered that it has to be converted into a mosque again in November 2019.