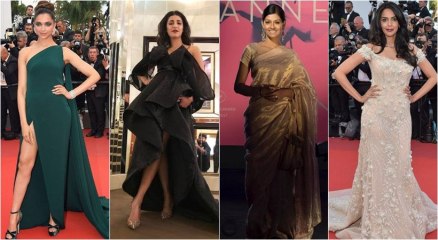 Cannes, France:
Bollywood at Cannes is all about fashion, style, and glamour. The gorgeous divas of Bollywood give their best shot at the Cannes Film Festival and often come in the eyes of the world media. Aishwarya Rai has been frequent in this Cannes Film Festival. However, thanks to L’Oreal Paris brand, many other Bollywood divas show their presence. Bollywood in Cannes is no longer an ignorable affair, it is growing every year, and this time it has been a mega one.

The actresses such as Aishwarya Rai, Deepika Padukone, Sonam Kapoor and Shruti Hasan reached Cannes from India. Ami Jackson on the other hand who is very much part of the Bollywood family came from the United States. The divas made sure that their dresses are enough to create a storm in the media. Well, this is the best part of the Cannes Film festival. It is style and fashion everywhere. Bollywood is not very much behind in this now.

Deepika Padukone is known for slaying style and she maintained the same image at Cannes this year. Sonam Kapoor who is experimenting a lot these days, made sure that she comes with something unusual and special. Aishwarya Rai, on the other hand, became the talk of the town yet again. It does not matter whether it is Meme or it is Fashion Trend, Aishwarya Rai remains in business at the Cannes. Shruti Hasan whose upcoming periodic drama Sanghamitra poster was released at Cannes made sure to make her presence felt with her beautiful black dress. Ami Jackson was the simplest of the others but her gorgeous dress made it a complete fashion tour for the Bollywood at Cannes.

Did you get a chance to see them all? Here are the collections of the photos for the Bollywood celebrities in Cannes.

The photos were taken from various sources and The Asian Herald does not have copyright of them.