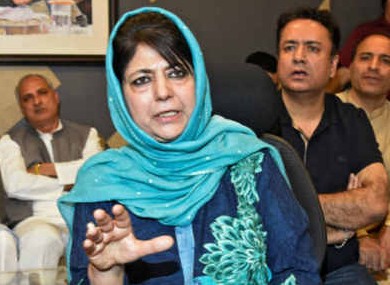 BJP-PDP Alliance ends after BJP withdrew support from the government of the Jammu and Kashmir. Well, this was not so surprising and was on the radar for the Political Analysts. However, few may question the timing. To be honest, they could have continued the tenure as they already withstood the toughest time since the killing of Burhan Wani and even the Asifa rape and murder case. But soon after the Eid, BJP withdrew support. There was no hint and Rajnath Singh just came back from J&K and all looked stable. Then why Mehbooba Mufti had to resign? Why did BJP withdraw support? Well, not so tough equation.

PDP and BJP both were losing the political relevance due to the continuous Kashmir Insurgency. The Ramzan Ceasefire was an attempt but the militants do not understand the language of the peace. Mufti had hardly any other option than to oppose the revoke of the ceasefire. Had she supported the decision, she would have lost all her political relevance in Kashmir Valley. PDP knows they need to win in Kashmir Valley to stay relevant and the wind was changing. The moderate Kashmiris who are neither part of militancy nor radicalized, want peace but not at the cost of lives. The fact is that Valley has more moderate people than extremists that we see on the news who pelt stones. Majority of the people want their kids to be educated, Kashmir to be developed and so on. PDP was losing support from them. The extremists or the separatist forces never believed in democracy, hence they can be counted out of this equation. Mufti knew that BJP-PDP alliance cannot sustain unless peace returns to the valley and it looks difficult under democratic machinery. So, it’s better to quit than to take the entire responsibility. Currently, it is better to be at the opposition than in Power in Kashmir.

BJP was struggling at the all India level and at the regional level as well. BJP saw a huge surge in numbers in the J&K Polls. Jammu and Ladakh region was much better for the party. It hardly has any hope in Kashmir valley though. However, the tedious situation in Kashmir where security personnel is being attacked now and often has dented the image of the party. Yes, many soldiers of security forces from all department whether Indian Army, CRPF or Jammu & Kashmir Police, have lost their lives due to the insurgency. BJP is facing tough questions from all parts of the country and as they are in power in J&K, they were short of answers. This has become a challenge for them ahead of 2019 General Elections and they also had hardly any option other than to end the BJP-PDP alliance.

President has already approved the Governor’s Rule in J&K. The security forces have already said that the counter-terrorism would be intensified and Police and Army may work together to eradicate the problem.