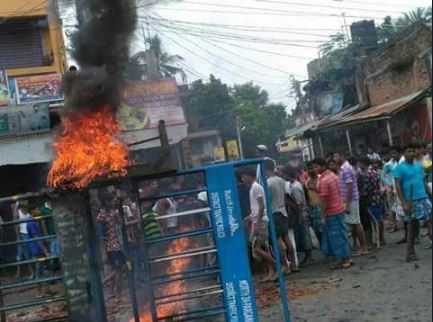 Bashirhat Riots have already escalated out of control. BSF Troops have already been posted at Bashirhat to control the violent mob. Mobs are reportedly open on roads and setting the shops, houses and everything on fire. The Bengal Tension is high and police are unable to control the hate of the mob. The Bashirhat Riots started as a boy shared some objectionable photo on social media. The boy has been arrested but the mob is on the rampage. The issue escalated since last night and as of now, 400 BSF paramilitary forces are on Baduria streets as Government has failed to control the law and order.

People of one community has targeted the others and put up the road blockers. There is fire on the road blockers as well. There are several photos from the Bashirhat riots that have shown the violent side of a communal clash. Mamata Banerjee was asked about the same by the Governor KN Tripathi. However, instead of addressing the situation, the Chief Minister has accused the Governor of acting like BJP Block President. An Elected Chief Minister has accused the Constitutional Head of the state of humiliation and threatening. The irony is that the state is seeing a violent riot at that time. The CM said that if someone shares anything on Facebook and clashes happen, then where is the fault of the Government? This should the most interesting question made by any Chief Minister. However, she has finally admitted to any riot this time. Bengal Tension is not a single day outcome; the communal rift has long been created by the political parties. The distance between the communities has been largely increased by the communal doctrine of the parties.

The disastrous result has been witnessed time and again in Dhulagarh and now in Bashirhat. The denial mode of the Chief Minister is not going to help. She should be above religion and community. There should be no compromise on the law and order. BJP Bengal Leader Dilip Ghosh has accused of Rape and Murder as well in the riots. The reports cannot be confirmed but one thing is for sure that Bengal once progressive is only going downhill.