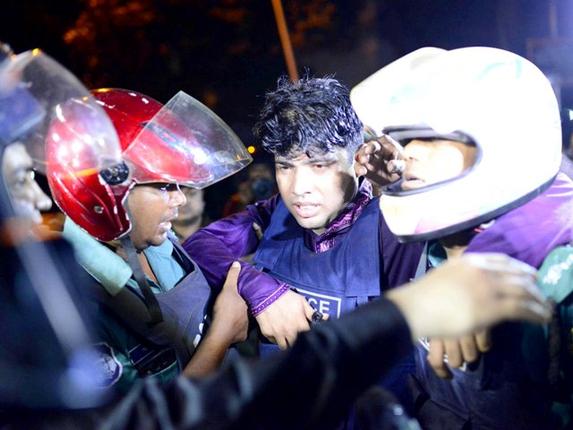 Bangladesh Attack : Latest news coming, Dhaka Attack has come to an end. The Commandos have taken control of the restaurants. No more death has been reported. However, there are many wounded among the hostage.

Two big bomb explosion has been heard during the morning hours while the gun battle is still on between the Dhaka security forces and the militants. As per reports, five dead bodies has been found and 26 people suffered injuries including two police officials.

SITE Intelligence Group that monitors the online activities of militants in Syria and Iraq said that the Dhaka attack has been carried out by Islamic State militants and as per their report the militants has held around twenty foreign nationals as hostages. However, United States released a statement condemning the attack and said that they are not sure that if the attack was carried out by ISIS though the militant group has already taken the responsibility of the attack in Bangladesh.


US spokesperson John Kirby said that there is a possibility that the Bangladesh attack was carried out by Al-Qaeda a notorious terror outfit in Indian Subcontinent. Meanwhile, Japanese Prime Minister Shinzo Abe offered help to Bangladesh to curb the situation. In the wake of the attack, Abe canceled his official tour to Hokkaido as reportedly several Japanese nationals were trapped inside the bakery.


Japanese external ministry released a statement claiming that Japan is one of the close friends of Bangladesh and is ready to lend support to suppress radicalism. As per a report, there are currently 906 Japanese nationals in Bangladesh and the Japanese government is concerned about their security. US lawmakers have also condemned the attack stating that they are closely monitoring the situation in Bangladesh.

Latest updates claim that around six militants have been killed by the security forces inside the bakery and dozens of hostages were freed. However, a report claims that few civilians lost their lives in the deadly attack. Currently, live television broadcast has been prohibited by Sheikh Hasina government. Lt. Col. Tuhin Mohammad Masud heading the operation against the militants claimed that some militants have been captured alive by the forces.

Manbij is free from ISIS – You cannot miss these photos

In Pics – Most Beautiful Photoshoot of Deepika Padukone ever!