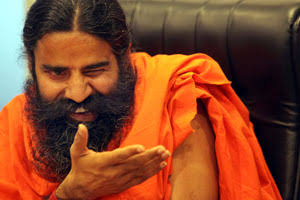 Baba Ramdev threatened to behead all the people who refuse to chant Bharat Mata Ki Jai if not abide by the law and constitution. The Yoga Guru Baba Ramdev was addressing a Sadbhawana Rally in Rohtak backed by the RSS. He was the lead speaker at the show that was attended by around 200 people including celebrities and eminent personalities like Randip Hooda, Sangram Singh, Himani Thakur and Yoginder Sharma.

In the Sadbhawana Rally, Baba Ramdev said that all the people who are decapitating the chant Bharat Mata Ki Jai should be very thankful that he and his associates are citizens who follow law and respect constitution. He added that if not all of them would have been beheaded. Even though he did not name anyone but he was clearly indicating Asaduddin Owaisi who said that he would not chant Bharat Mata Ki Ji. The row is escalating everyday as a Fatwa has been declared on the chant. This is another controversial statement that can create uproar in the area. Rohtak is the same area that took the center stage for the violence and protest of Jat Reservation. The organizers said that these kind of rallies can keep people united. However, the language used in the rallies does not indicate the same.

The Sadbhawana Rally simply means to transfer some good thoughts and it was an apolitical rally as claimed by the organizers. However, Baba Ramdev who is a BJP follower did not leave the opportunity to take dig at Congress and Kanhaiya Kumar as well.

Yogi Adityanath takes another stern step in UP

Shiv Sena BMC Crisis – Brother at Rescue, but will it...

Narendra Modi beats All World Leaders – Another Feather in the...

Sukma Tragedy – Why it is time to value the life...