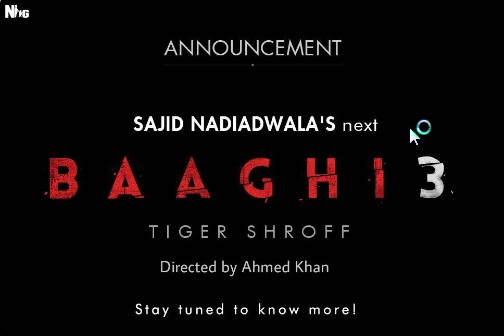 Baaghi 3 has been announced by the makers even before the release of the trailer of the Baaghi 2. The best part is that the makers are trying to give a statement to the audience about the confidence on the project. Ahmed Khan who has directed the Baaghi 2 would also direct the third installment of the movie. But who has been cast in this? Well, the makers are not releasing Tiger Shroff for Baaghi series, but the leading lady may change for Baaghi 3.

Drumrolls 🥁🎷
Our excitement level has just tripled! We are thrilled to share the 3rd instalment of #SajidNadiadwala’s Baaghi franchise starring @iTIGERSHROFF directed by @khan_ahmedasas#Baaghi3 @WardaNadiadwala pic.twitter.com/ijYdyIqbVs

The first installment of the movie was released in 2016. Tiger Shroff and Shradhaa Kapoor were tremendous and the movie earned around 76 Crores lifetime business. The makers roped in the rumoured couple Tiger and Disha Patni for the second series. The trailer is set to come on February 21st. However, it is not announced about the leading lady. The second part of the movie might give some hint about the third. It can be a general sequel to the unfinished end of the movie. It can be a new movie altogether under the same brand name as well.

However, one thing is very sure, that Sajid Nadiadwala has shown immense confidence in the director and Tiger Shroff for the Baaghi series. The collections of the Baaghi 2 may further boost the confidence of the makers. However, as of now, the focus is on the Baaghi 2 whose trailer is highly anticipated especially for the romantic couple Tiger Shroff and Disha Patni.