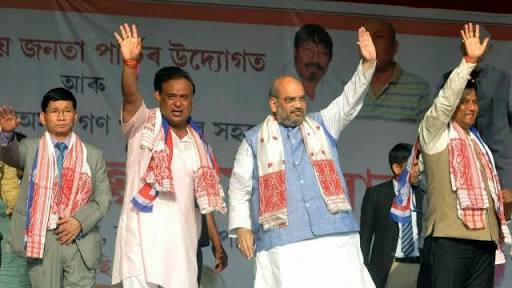 BJP is set to get Assam State with good majority. This may put Indian National Congress in dismayed situation. The early trends of Assam Election Result Live has clearly indicated the #NamoWave. BJP has campaigned very hard in Assam and this may just put Congress in unrecoverablesituation.

Assam Elections Results Live has set yet another setback for congress. The time has come when serious questions should be asked to the leadership. Congress is slowly wiping out of India and introspection is seriously required. The policies and leadership of the party should be reconsidered.

BJP has secured  the majority mark in Assam all alone. This can be a huge upset for Congress. Congress under the leadership of Rahul Gandhi is already struggling in India and different states. It has been almost wiped out from the National Politics and the defeat in State Assembly Elections may result in further embarrassment for the party.

The party is performing poor in almost all State Assembly Elections leaving apart Puducherry Elections 2016 where the party has won majority seats.

The Exit Poll indicated a victory for BJP and Assam has chosen BJP by removing incumbent Government with the Assam Elections Results Live.