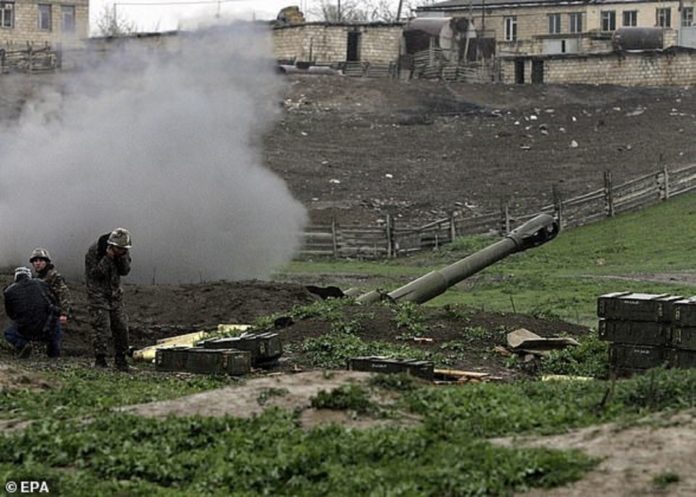 Armenian-Azerbaijan war is looking grim. As the bitter dispute over the Nagorno-Karabakh region claimed 39 lives, Turkey is flexing its muscle. Recep Tayyip Erdogan, the Turkish President, has sent F-16 fighter jets and at least 4000 troops backing Azerbaijan from Northern Syria.

The Armenian separatists claimed that they were attacked by the Turkish forces. Turkey said they stand behind ally Azerbaijan. The relation between Turkey and Armenia has been very poor over the Armenian genocide during World War I. Almost 1.5mn Armenians were killed and deported by the Ottoman Empire.

This could also bring Russia into play which is a major ally of Christian majority Armenia. Russia has close ties with Armenia and has a military base.

This could also escalate the already suffering global oil and gas supply. The pipeline passes through the South Caucasus region and de-stability here could further worsen the situation.

Erdogan said that Armenia is the biggest threat to peace in the region. Azerbaijan President Ilham Aliyev said that they are defending their territory.

The United States said they are closely looking at the situation and urged both parties to stay calm. However, Turkey has jumped into action to escalate the situation. Turkey is jumping into the war more because of Armenia rather than support to Azerbaijan.

Kremlin is a big arm supplier for Armenia and Azerbaijan. Both were part of the Soviet Union. The problem of the Nagorno-Karabakh region in fact started in Soviet times.

The worst escalation between the Armenia-Azerbaijan war was in 2016. Since, 1994, when the ceasefire was announced, at least 7000 violations are reported.

The battle continues on Monday morning as well. The Armenian separatist leaders say they have reclaimed a lot of areas.

Nagorno-Karabakh region is a disputed region between Azerbaijan and Armenia.