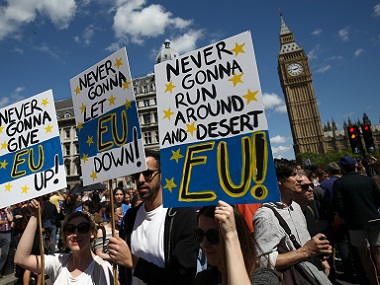 Anti Brexit protest and voice are getting stronger with each passing day in Britain. The protesters recently came to the streets for showing the support for EU. The protest shows a huge number of turn around. However, the point is why Britain is now gaining the Anti Brexit force after it has chosen to exit the EU. There are quite a few reasons behind it. For example, if we were to have a Brexit fallout, what would this mean to the European Health Card that so many working-class families live on when abroad? They are even demanding another referendum for Leave and Remain campaign. However, the chances of the second referendum are bleak. Here are the reasons why Britain is protesting against Brexit.

The Remain voters lost by only 4% and that are troubling them. London, Scotland and Northern Ireland have voted for Remain and they are stood to lose a lot for Brexit.

The projected economic Slump is now quite evident and the people are now getting the point. London is set to lose huge for the Brexit and that is hurting them. Scotland can even go for another Independence referendum as a result of it. Already many top companies have threatened to pull the trigger and London and Edinburgh will be hit hard.

The Anti Brexit people are now claiming that the leaderships that were in support of the Brexit misled the nation. They are saying that the nation was misled about the Brexit and people were not aware of the impact.

Brexit has hit the students, young entrepreneurs, and the employees hard. The Anti Brexit has come to the street but will it change anything? It does not seem so.