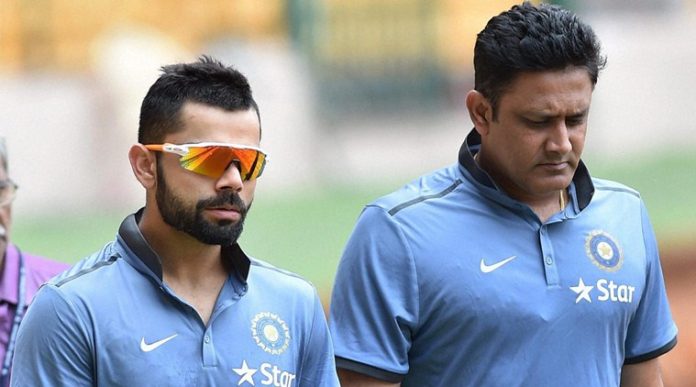 Anil Kumble steps down and the Indian cricket has shambled. The most successful Indian Coach with high respect and result resigned with just one year. There was no reason to discontinue Anil Kumble but the spat or untenable differences with the Captain, Virat Kohli.

So, Virat Kohli did not want a coach who was a hard taskmaster and wanted a soft guy to coach the team. Anil Kumble tweeted and said that he came to know from BCCI that Captain has issues. Let’s come to the facts straightway.

Virat Kohli does not want Anil Kumble as Coach of team India and despite all the attempts to sort the differences.

Interestingly, everything was going on when India was playing the Champions Trophy. Virat Kohli met the CAC just before the Final and was reportedly adamant that he would not continue with Anil Kumble. When there is something wrong in the dressing room, it is very evident that the same will be reflected on the field and the same happened in the final.

However, that is not all. The reports say, after the Champions Trophy final debacle, Kumble scolded the team, and Virat and Co could not digest that. Virat Kohli has not taken any responsibility for the defeat and has only showered praise for the opposition. In fact, the reports say that in the last few days, Kumble spent time with the bowlers only as the highly rated Indian batting line up were not in talking terms with the Great Legend of Indian cricket.

This is the result of overhyping of the Indian Cricketers, poor BCCI administration and no control over the players. Today, the captain can change and influence the coach selection, tomorrow the selectors and then players, and overall, Indian Cricket Team becomes the Indian Captain.

Rahul Dravid recently mentioned that BCCI should make sure about the players like Yuvraj Singh and MS Dhoni as the 2019 World Cup approaches. He also mentioned that whether both should continue or one should be specified by the Selectors. However, the decision may not be with BCCI, may Kohli will respond to this after the West Indies Series. The present condition of the Indian Team is slowly worsening and Captain Kohli needs to answer many questions.

Sorry, Indian Cricket Team is not going anywhere and the only path that leads from here is self-destruction unless BCCI and the Supreme Court appointed Committee wakes up soon.