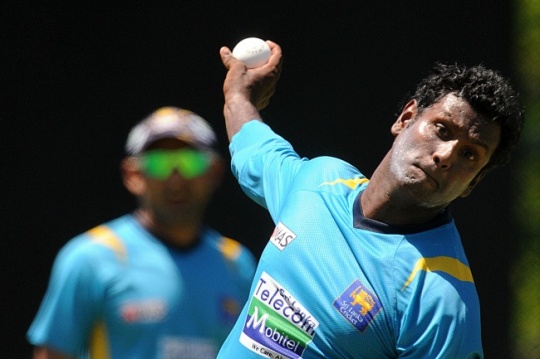 Angelo Mathews, the Sri Lanka Captain, will miss the starting leg of the Indian Premier League. He is also set to miss the T20s that are to be played against Bangladesh. The Sri Lankan Skipper has missed the matches against Zimbabwe and Bangladesh so far after suffering from the hamstring injury against South Africa.

Sri Lanka Cricket Manager Asanka Gurusinha has confirmed that Angelo is yet to get the 100% fitness and may miss out the starting of the IPL. However, he may be the part of the IPL at the later stage. However, a certificate of fitness may be required from the physio before he joins others in Delhi Daredevils team. Angelo Mathews has a major role to play in the IPL after the injuries to Q De Kock and J P Duminy.

The Delhi Daredevils team has already suffered major blows due to the injuries and the news of Angelo Mathews can disappoint them even more. However, no reaction has been shared so far. Perhaps, the team is waiting for the final confirmation of his participation. It is believed that Angelo will play most of the matches in IPL if he regains the fitness, but may miss first few matches. He is presently recovering fast, but it is almost certain that he won’t be part of the Sri Lanka team for the Bangladesh T20s.

It is believed that Sri Lanka Cricket Management does not want to take any chance with him. The Champions Trophy is the next assignment and without him, Sri Lanka has been outplayed so far in many sections against Bangladesh.

Inzamam ul Haq supports Virat Kohli – Here is what he...

IPL Records – You Must Know these 5 Records