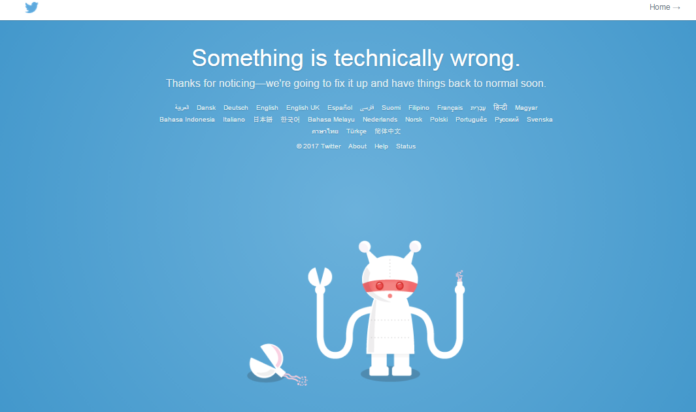 Twitter Outage has once again left the users displeased. The Social Media site was down due to some technical issues and no content was displaying on the micro blogging site. The same problem was in Mobile Browser and in App as well. Twitter was not accessible now for the millions and millions of users. However, the site was showing some inconsistent behaviour that makes it available for some others as well. The incident occurred in the morning today.

It cannot be immediately said that what has caused the problem for Twitter. However, the team worked to fix the issue. It could have been a temporary problem for the micro blogging site which would be soon addressed. However, the team is yet not sure about the issue. There are some particular issues that are going on in Twitter currently. The first is the Home Page is not showing up and the web services seem to be down as well. On the other hand, the contents are not getting populated in the App or in pre-loaded page.

The issues seems to have solved for the users now, however, some still complaints of unexpected errors and inconsistent behaviour were reported even after the outage. Since last few days, the WhatsApp faced major outage when people from all around the world could not use the service. The Twitter Outage seemed similar today.

According to the sources, the service has been restored in all places. The outage however stayed for close to 15 minutes that is actually considered very high for a platform like Twitter. With increasing user base, the server maintenance has become a challenging task for the micro blogging site.

Application outages or scheduled maintenance on services and programs used in the workplace can cause confusion and, thus, lost time. This can be remedied by the implementation of a status page.